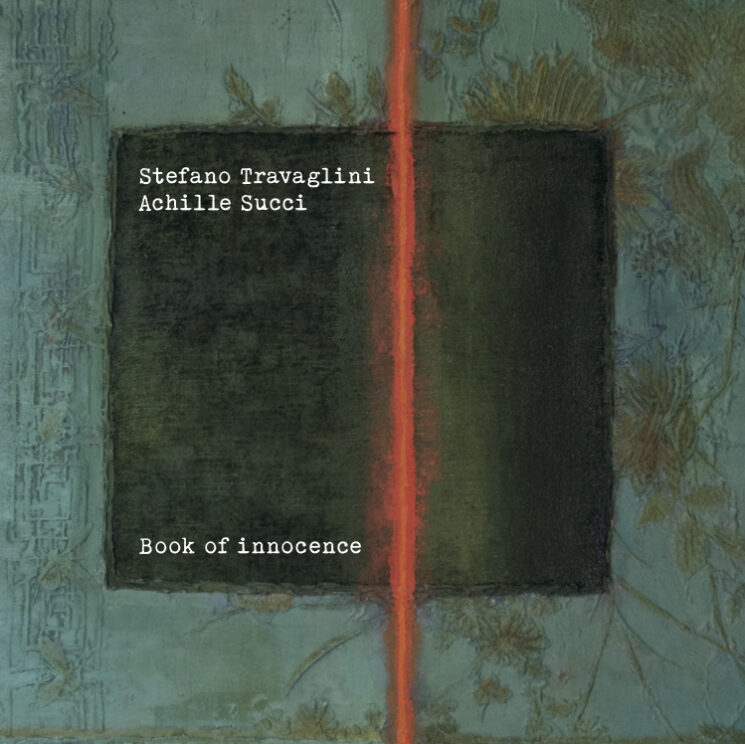 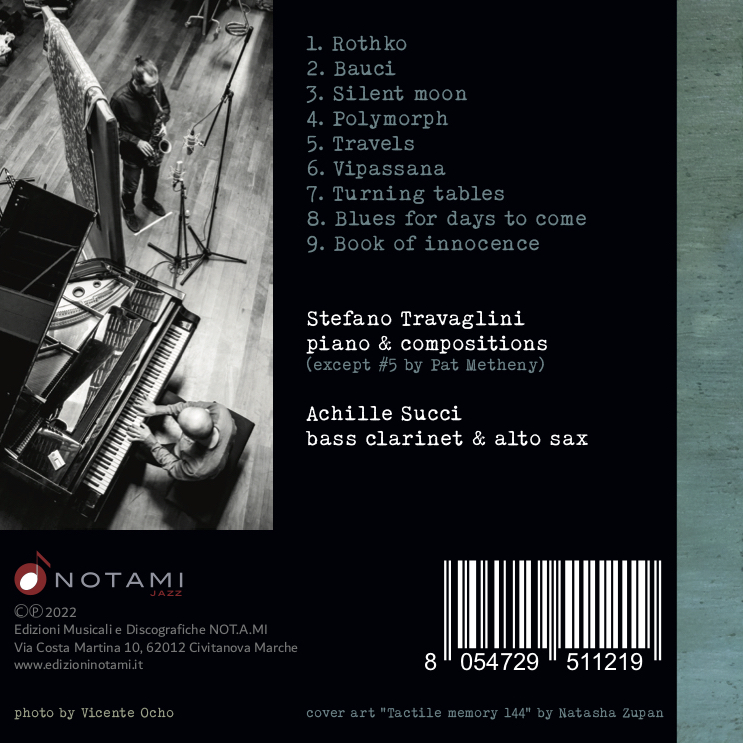 With their new recording, Book of Innocence, Stefano Travaglini and Achille Succi have released an inspired recording and it is something quite beyond convention.

Stefano came to my attention in 2017 with his extraordinarily wide-ranging solo album Ellipse (Notami Jazz, 2017), his first leader recording. Another outstanding solo outing came in 2020 with Monk – Fifteen Piano Reflections (Notami Jazz). A multi-instrumentalist and composer, Stefano’s primary focus, on his recordings, is the piano. He won first prize at the International Piano Competition for Composers “G. Canciani” and Book of Innocence is Stefano’s fifth album as a leader or co-leader. As on two of his previous releases, The Hungarian Songbook (Terre Sommerse, 2013), and The Long Line (Odradek Records, 2019), Book of Innocence is a duo recording with fellow Italian, Achille Succi. He is a multiple award-winning musician, principally self-taught, on alto, and bass clarinet. Achille has performed with Louis Sclavis, Ab Baars and Ernst Rejiseger, among others.

Piano/clarinet duos are rare but the Travaglini-Succi duo presents a captivating interchange, based on visual arts, literature, and a myriad of further stimuli. The album opens with “Rothko”, inspired by the Russian-born abstract expressionist Mark Rothko. The artist has been celebrated in music before; most notably with Morton Feldman’s chamber work, “Rothko Chapel” and the dark alternative rock of Peter Gabriel in “Fourteen Black Paintings”. In its context, the Book of Innocence tribute is truer to Rothko’s artistic vision with its surreal churning of direction and timbre.

“Bauci” takes its inspiration from the novel “Invisible Cities” by Italo Calvino. The musical piece more than does justice to the fanciful tale that ponders on notions of recollection and place. Achille, here on bass clarinet, plays a beautiful, unassuming melody over the intricate harmony of the piano. “Silent Moon” and “Turning Tables” each exude a nocturnal serenity without limiting the possibilities of their individual instruments as Stefano and Achille switch places at the forefront. In these pieces, the duo excels in a creative interaction that is both fragile and impervious.

Pat Metheny’s “Travels” is the single cover on an album of Travaglini compositions and improvisations. The duo gives us an inspiring and imaginative take on the guitarist’s 1983 original, retaining Metheny’s evocative feeling while immersing themselves in their heartfelt version of the piece. On “Blues for Days to Come”, the lead is given over to Achille while Stefano supplies circular rhythm. As the piece progresses, Achille’s playing opens up and his excellent improvising puts the “blues” in a more modern context.

Book of Innocence closes with the extended title track, bringing the album to a thematic full circle. “Book of Innocence” has something of a spiritual connection to Henri Matisse’s The Red Studio. That 1911 creation by the French artist was less than universally embraced initially, but went on to influence other great artists including Rothko. It is a survey of some of the artist’s work consisting of paintings sculptures, and ceramics, within a single painting. With great resourcefulness, Stefano and Achille incorporate six of the pianist’s shorter compositions into a single unified grouping. The transition is almost seamless and the music is, by turns, poignant, cerebral, or reflective.

It is no surprise that Book of Innocence finds inspiration, in part, from the works of masters of the visual arts. Stefano and Achille paint vivid pictures with their music establishing a meeting ground for diverse artistic expressions. The duo plunges themselves into the full extent of their imaginations; their playing is neither predictable nor pretentious and not a note is wasted.

The Museum of Modern Art describes the centerpiece of Matisse’s The Red Studio as a grandfather clock with no hands. They suggest that the visual work exists in an environment where time is put on hold. It can be said that this exceptional work of art, Book of Innocence, lies in a similar place. These two virtuoso musicians have given us a collection that warrants repeated and complete attention. It is an exceptionally rewarding listening experience.

“I have been fortunate this year in being asked to review a number of album releases by Italian jazz musicians and all have been very good examples of contemporary European style jazz and Book of Innocence is among the best of those I have heard so far. The musical relationship between Travaglini and Succi is as strong as it is supportive and complementary. The music is beautifully emotional, evocative, reflective, nuanced and intelligent.”
Simon Defty, SimplyJazzTalk